Ulay so you see me
Commissioned Responses

On the occasion of the exhibition Ulay: so you see me at Cooper Gallery, four artists and writers, Jude Browning, Amelia Bywater, Seán Elder and Kirsty Hendry have been invited to respond to Ulay’s practice by producing a new text-based work. Click on the images below to read full texts. 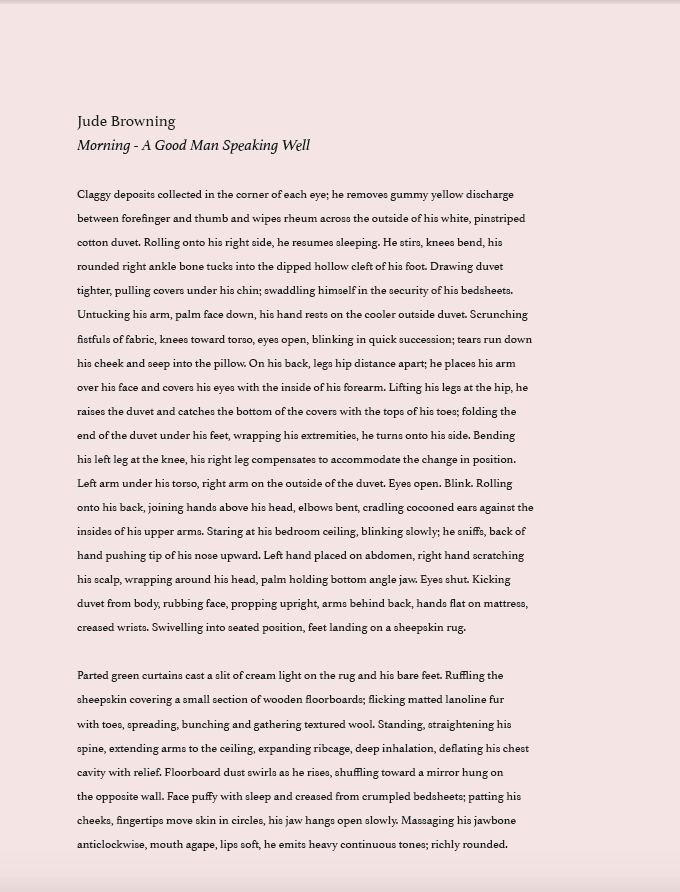 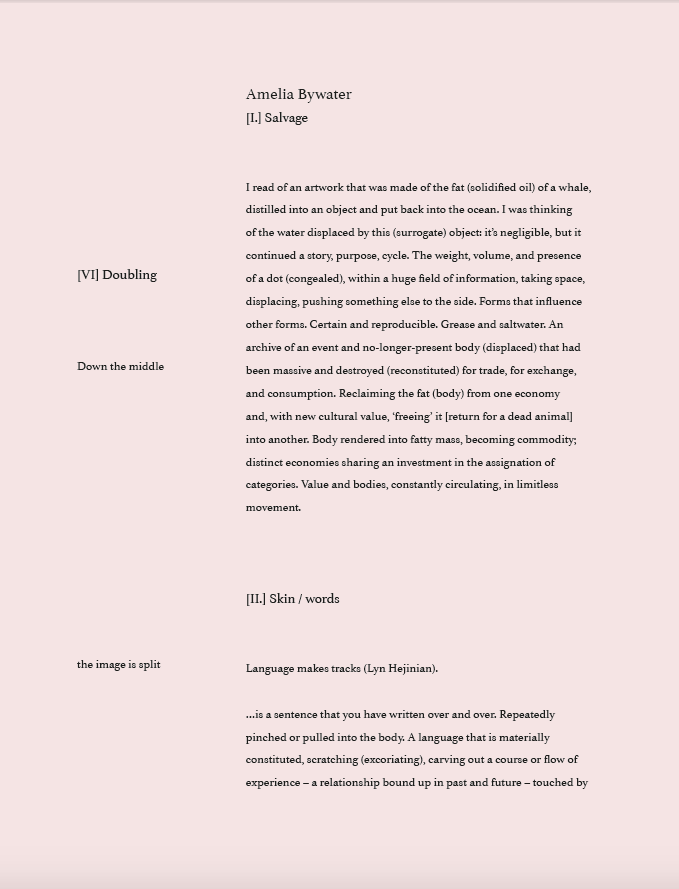 ♦
Seán Elder
A Map of Action 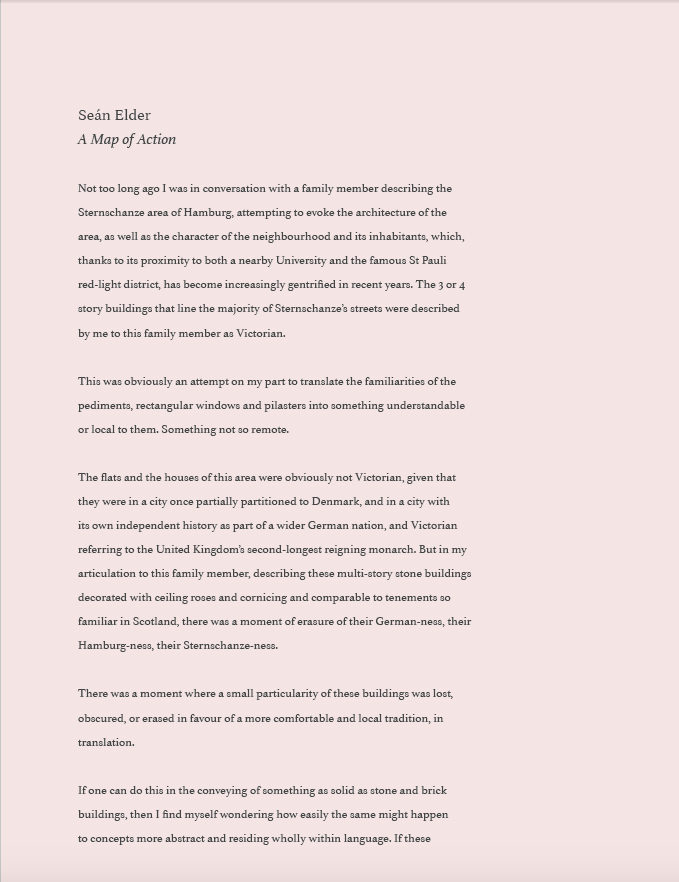 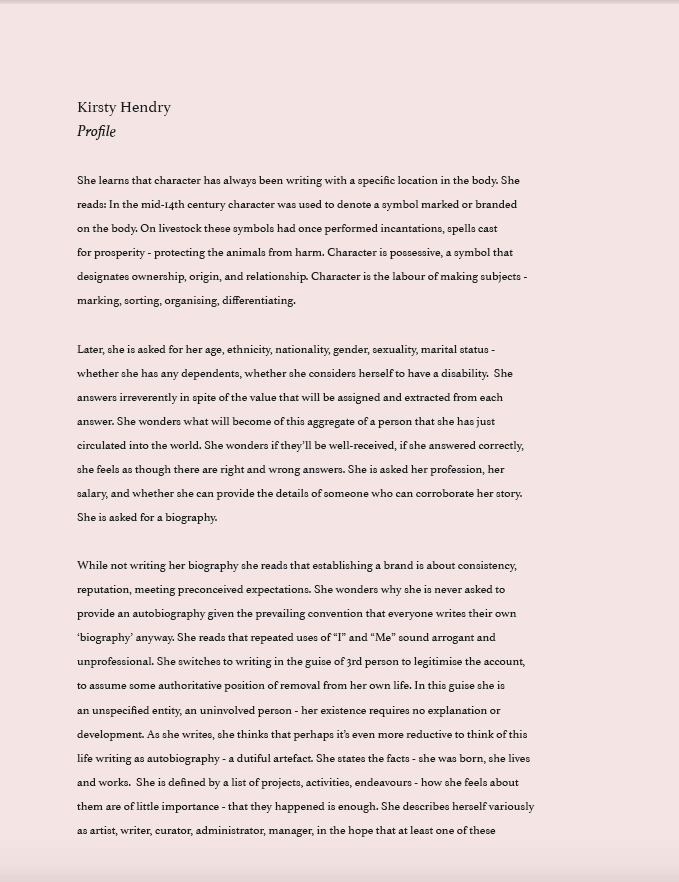 Jude Browning is an artist and writer based in Glasgow and current practice based PhD candidate at Edinburgh College of Art. Her PhD Mouthwork: Staged Presentation and Laboured Expression investigates a relationship between language and professionally training the voice and body for forms of public speaking. Through acts of writing and performance she explores expectations of failure, the practice of recitation and resulting tensions between desire and requirement. By plotting a network of references from performance art, theatre studies, queer and feminist theory her research considers personas of the speaking body as a medium of persuasive communication. Recent public events include To write, to speak, to publish, to move in collaboration with Emmie McLuskey at The CCA Glasgow, Figure 4 at Baltic Project Space (curated by Kati Kärki, with Kirsty Hendry, Jake Watts and Magda Buczek), Oral Rinse 2 at Waterloo Action Centre, Squeezer Collective, SAR 2016 conference Writing as Practice, Practice as Writing and Cally Spooner’s Study Week at Wysing Arts Centre. She has organised national events centered around the dissemination of writing as artistic practice at The CCA, The Cooper Gallery, The Whitechapel Gallery, X Marks the Böxship and in collaboration with Paperwork Magazine.

Amelia Bywater lives in Glasgow. Much of Amelia’s work involves a movement across collaborative practices, often looking to what is facilitated and included in modes of collective working, and exploring notions of the self in discursive space, and intimacy in technological space. Works take the form of text and publishing in print and online, and installations including video and performance. Since 2010 she has collaborated with Emma Fitts on a publishing project Victor & Hester, and began loomloomloom in 2016, a publishing project that hinges on collaborative working. She also makes work with artist Rebecca Wilcox, and within a collective OAPAO with Mark Briggs, Sarah Forrest and Rebecca Wilcox. Recent projects include I digress, Enjoy Gallery, Wellington, NZ (2017); lang. nest. ins., with Rebecca Wilcox, CCA, Glasgow (2017); Horror film, OAPAO, part of Two Night Stands, Cooper Gallery, Dundee (2017); BLOW UP MY TOWN, with Liam Casey and Gesa Helms, Market Gallery, Glasgow (2017); The Triumph of Geology is Total, with Scott Rogers, Publication Studio, Edmonton, Canada and CCA, Glasgow (2017).

Seán Elder is a Birmingham-based Curator from the far North of Scotland. He is currently Associate Curator at Grand Union and his research seeks to situate the Curatorial as a site for potential development and mobilisation in relation to Queer and Other’d art practices. He completed an MLitt in Curatorial Practice (Contemporary Art) at Glasgow School of Art in 2016. Recent projects include To Brent: The Photography of Mark Morrisroe, Essay for NOTES Photography Journal, Summer 2017; Introductions, Writing for Habits of the Co-existent, with Tako Taal, The Newbridge Project and Platform Glasgow, (2017); Anthology of American Folk Song: Selected Shorts by Steve Reinke, Glasgow Film Theatre (Curated for LUX Scotland), (2017); and tracing the [public] garden wall, with artists Gordon Douglas and Tako Taal, Glasgow Botanic Gardens & The Glasgow School of Art, (2016).

Kirsty Hendry is an artist who produces writing, events, and projects interested in practices of distribution and their relationships to language, identity, and subjectivity. Hendry’s works often reflect on ideas of labour, work, and the body; unpicking their effect upon our sense of selfhood and embodiment.